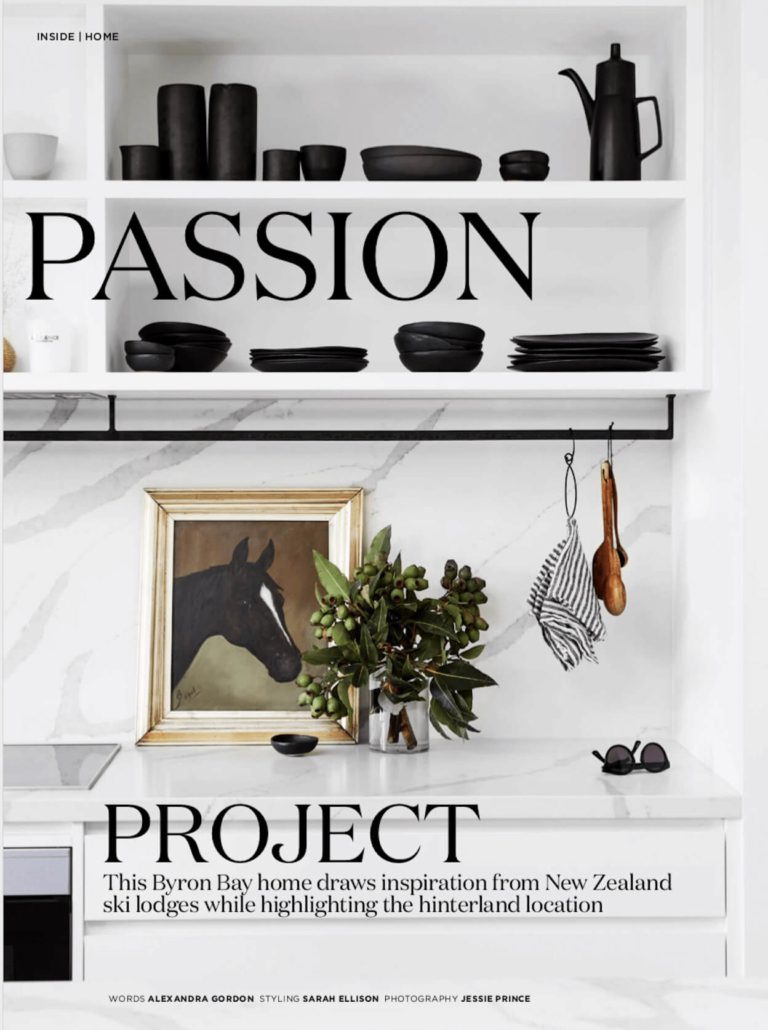 INSIDE OUT MAGAZINE (ONE OF OUR FAVES) HAS A FABULOUS FEATURE PIECE IN ITS NOVEMBER EDITION WHICH NOT ONLY TELLS THE STORY OF THE TRANSFORMATIONAL JOURNEY FROM A 70’S CEDAR-CLAD CABIN TO ONE OF BYRON’S MOST PRESTIGIOUS PROPERTIES, BUT ALSO PROVIDES FLOOR PLANS AND THE INSIDE INFO ON EVERYTHING FROM BEDDING AND RUGS TO FURNITURE, LIGHTING AND FITTINGS USED IN THE LODGE.

It was a two and half year journey from when Taliah and Sein Lowry first purchased the property in a quiet and private spot in the heart of Byron’s golden grid and just metres from the ocean, its beaches and iconic coastal walks. It was to be home to them and their three boys – Jai, Blaze and Reef.

Taliah’s ethos is all about recycling and upcycling as well as protecting the original fabric of Byron Bay but the original 70s cottage on the block could just not be worked into a cohesive design. Rather than demolish though, they found a local designer who was happy to relocate it to her property in the Hinterland and the blank canvas was ready!

Like on all of the 10 properties Taliah has developed and which form the Byron Beach Abodes portfolio of luxury holiday accommodation, it was finding the right inspiration to make the most of the environment in which she was going to build which would take the time. She decided to build a house – now known as The Lodge – that bedded beautifully amongst the towering gums that were already on the property and the materials would echo nature’s own design motifs and colour palette.

Rather than hanging around while the build was underway, Taliah and the family had a gap year living in Queenstown, and ran the project remotely, with trips back to Byron every 4-6 weeks to check in with trusted mate and designer Kate Sacks. The end result was heavily influenced by the rugged beauty of New Zealand’s mountains and distinctive architecture, a sense of which pervades The Lodge and The Cabin which was added below.

Recycled jarrah cladding is used inside and out and natural limestone floors flow seamlessly from the inside to the outside leading to a naked swimming pool and entertainment deck. Linen drapery, sheepskin rugs, a large fireplace and the jarrah-clad outdoor spa all add to the sensibility of a lofty mountain-top home, with the twist of being just metres from the vast Pacific Ocean.

This is a beautiful feature so thank you Inside Out. We hope you enjoy it and can take some inspiration from it yourself for your own projects. 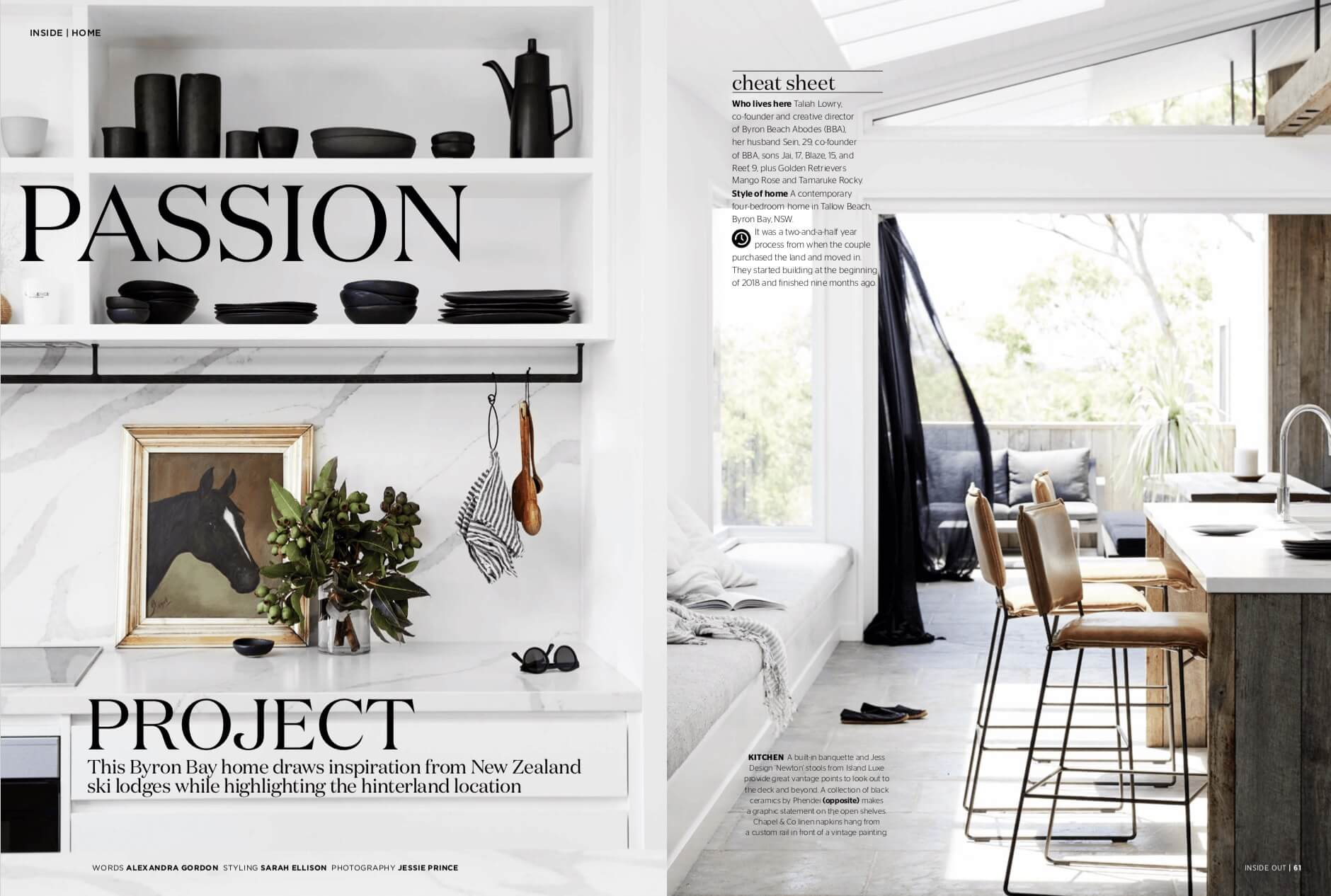 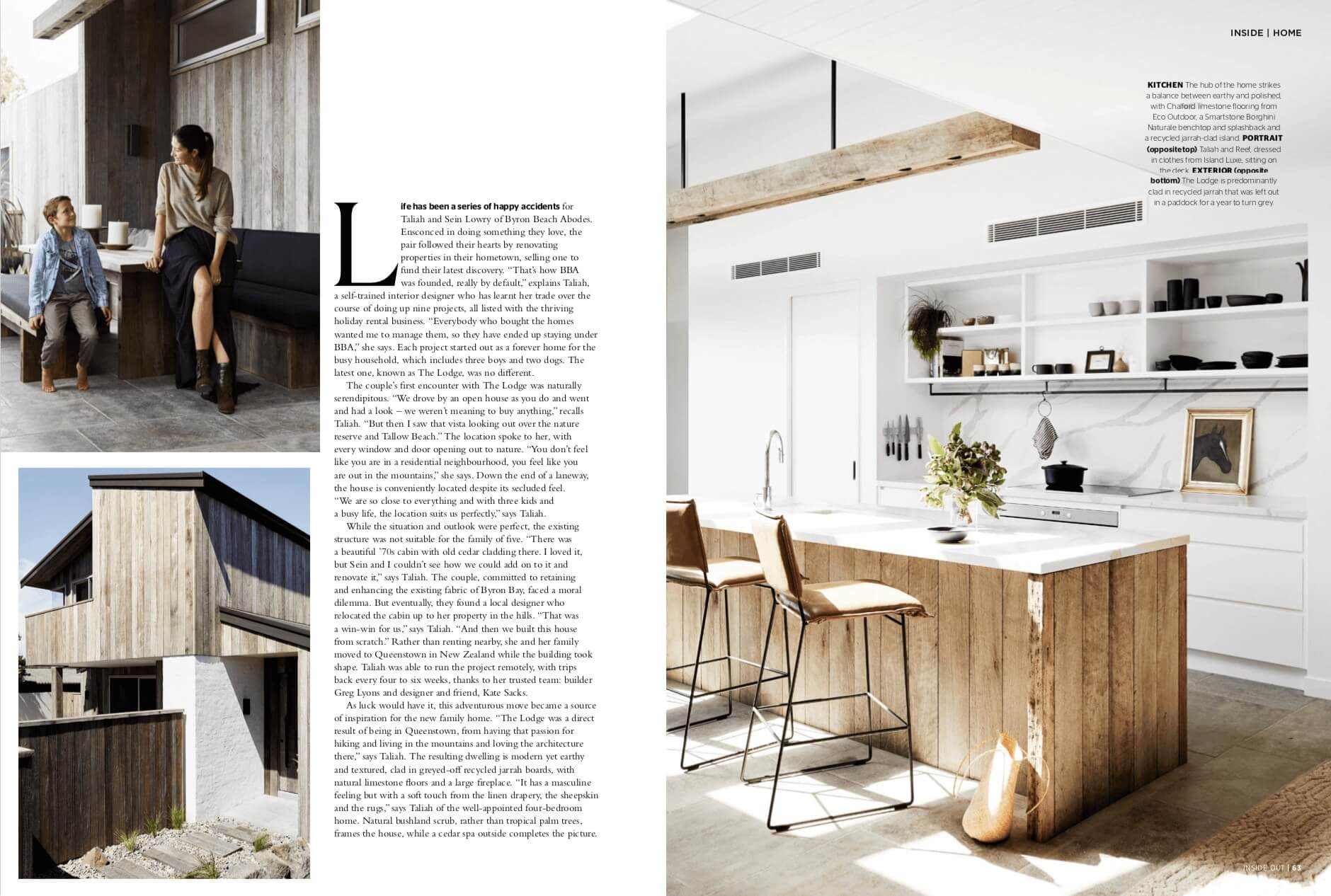 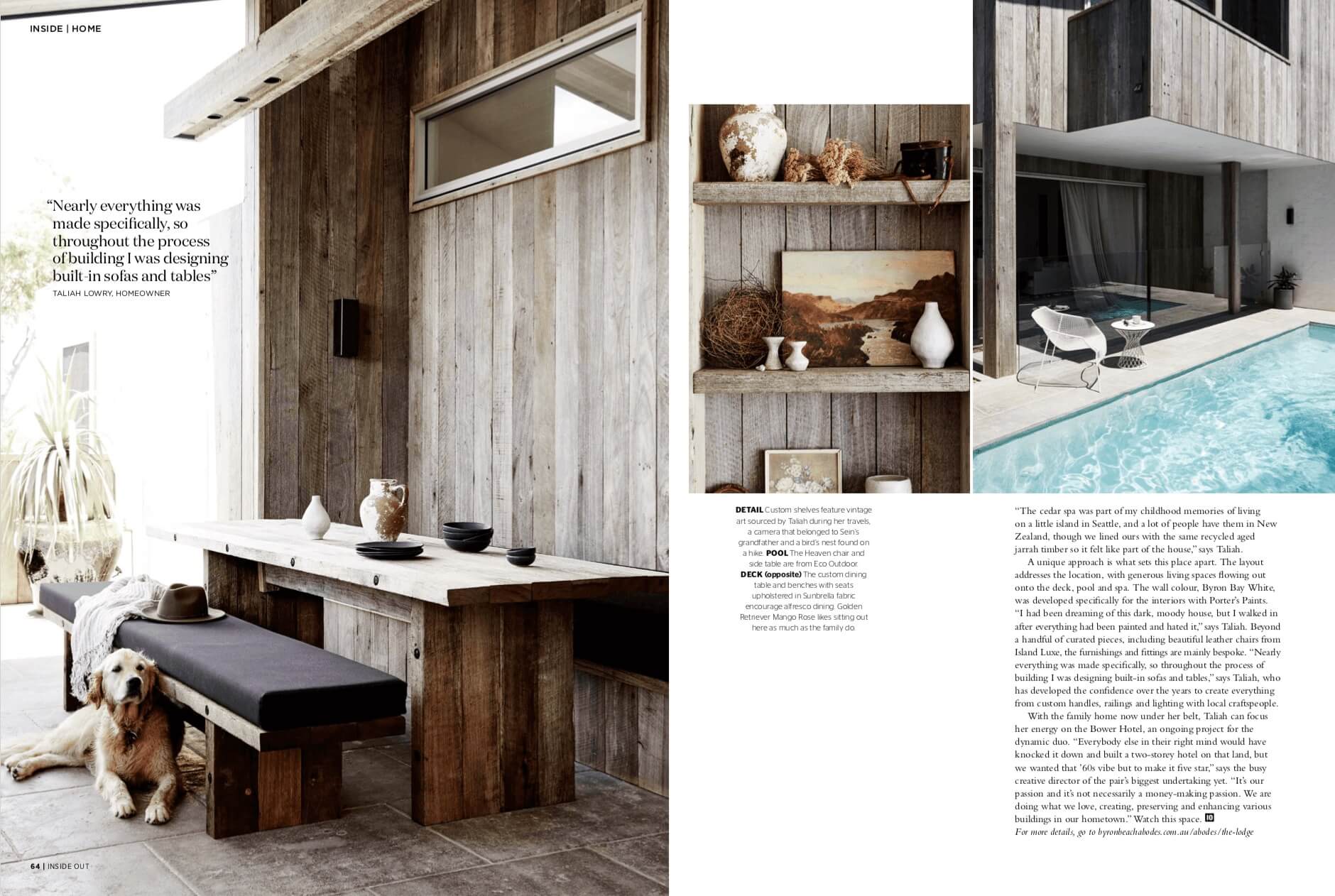 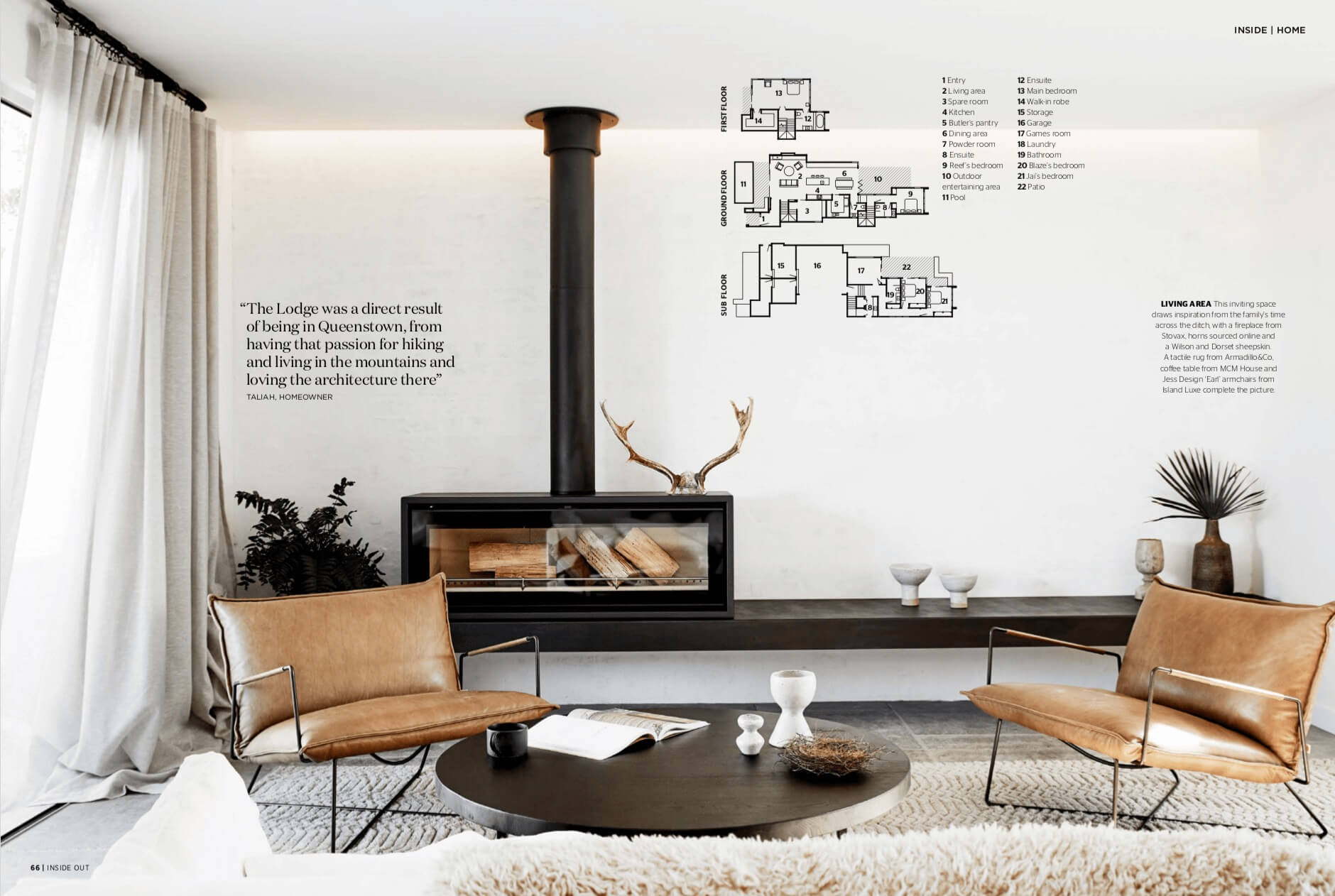 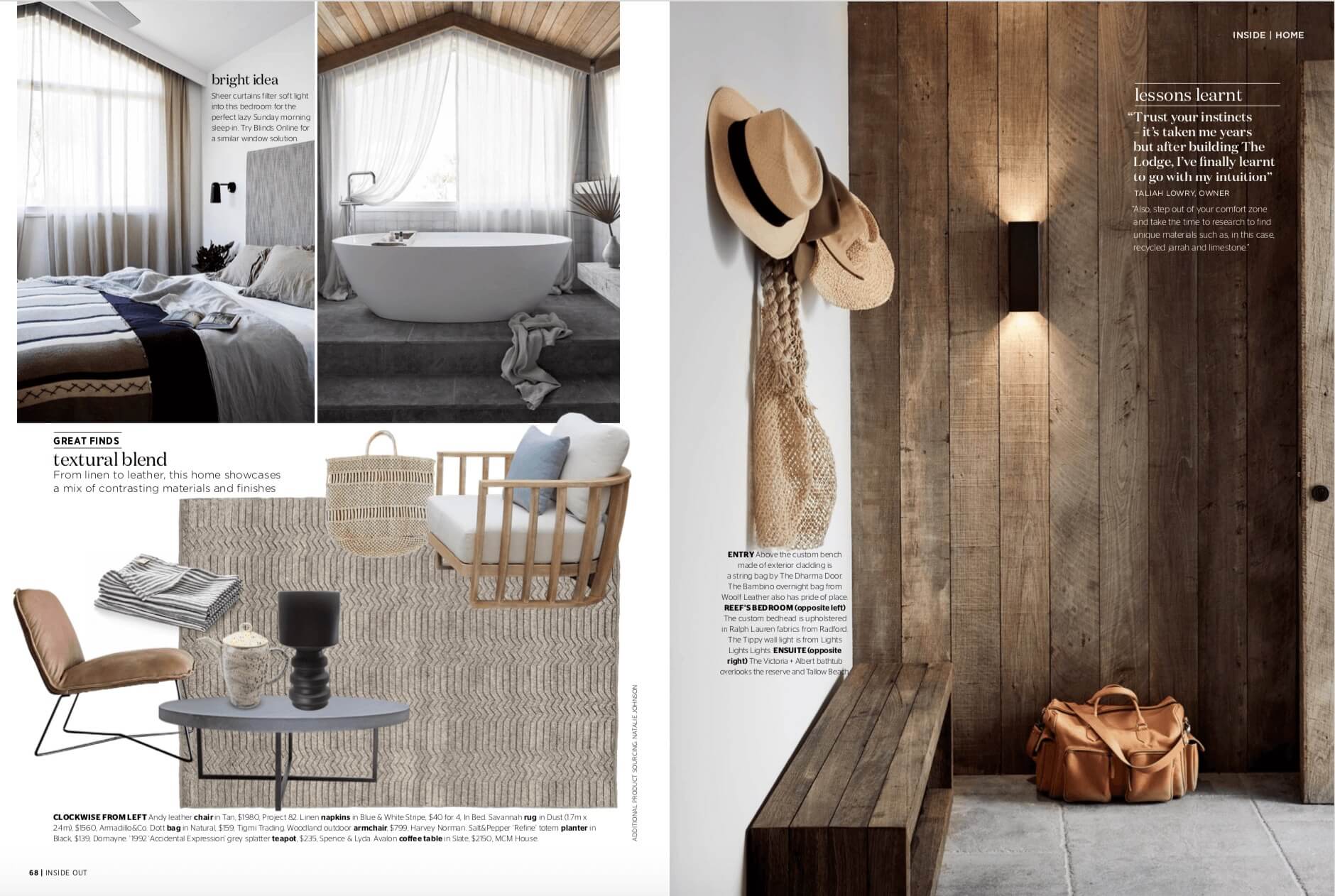 PHOTOGRAPHY Jessie Prince
Images supplied by Inside Out Magazine

Byron Beach Abodes acknowledges and pays our respects to the Arakwal People of the Bundjalung Nation, the traditional custodians of the land on which we live, love, work and play. We pay our respects to Elders past, present and emerging.

Byron Beach Abodes acknowledges and pays our respects to the Arakwal People of the Bundjalung Nation, the traditional custodians of the land on which we live, love, work and play. We pay our respects to Elders past, present and emerging.